skip to main | skip to sidebar

Hey, we DID see you again!

I forget this girl's name and which season she auditioned, because she was only a semi-finalist and didn't make the final cut. BUT she was the girl from like, Wisconsin or wherever, who really loved her family and just cried the whole time about how she wanted to go back home and smash grapes with her feet. She gave Tyra a grape-stomping lesson in front of the panel, remember? And she was insanely skinny and had disturbing bruises and generally looked like a heroin addict and that's why they didn't let her on the show. Aaaaaaand, clearly the sad truth is that it's the insanely skinny heroin addict-looking girls who actually have a better shot of becoming working models. That is the recipe for model success. That and not making it onto ANTM. I've seen her in other ads and things before and was like, go skinny girl! You're working! Not loving the hair though. Though apparently a life stomping on grapes will aid your ability to stomp down a runway. She was in Jerrell's show so we didn't get to actually see her on the finale, but thar she blows!

Danielle!! Or Dani, as we must now call her. I love her, and she looks great. She's actually been on of the more successful ANTM winners. Her contract with Cover Girl was extended, and she was in a CG commercial with Queen Latifah. I think she was in the Project Runway finale last season too. Ebony and ivory, suckah! 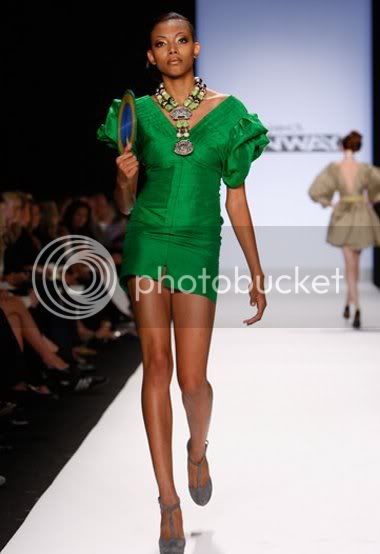 Ewwww. Bianca. What a stank ho. She's such a bitch. She was in Chris March's runway show last season too. I really don't understand why she is getting work, since I still think she totally looks like a dude, and not in a good way.

One more photo of Bianca, even though I hate her, just so we can laugh at how short that dress is and how close the Bryant Park audience was to seeing her hoo-ha. That could not be pleasant.

Naima totally auditioned too but from what I can tell, she wasn't cast. Unless she was in one of the decoy shows, because I haven't watched all of them yet. Poor Naima. I always thought she was really pretty, and I dug her faux hawk, but she seriously has had the least success out of all the winners. Oh well.

Also, Jaslene was in Jillian's show on the P.Way finale last season, too! She totally got a diva cheer when she walked down the runway, looking pretty fierce I must say.
Posted by Spontaniouse at 12:45 PM

I will never understand why Dionne got such a hard time for "looking mean" but they never called out Bianca. I don't think she has a facial expression that isn't some variation of stank.

I know! What the HAY-ell? At least Dionne was hilarious, while Bianca was nothing but stank.